HONORING MEMBERS OF OUR COMMUNITY

FIRST RESPONDERS, TRAFFIC RESPONSE, AND MEDICAL PERSONNEL are often the first people our clients see after they have been injured in an accident or other detrimental event, providing life-saving measures and shepherding them to safety. We, along with our clients, are incredibly grateful to these heroic people who put their lives on the line every day so that we can be safe or cared for in the event that we have been hurt. We don’t believe that they get enough praise and credit for what they do!

Hardin’s Heroes was created by Matt Hardin to honor members of our community who go above and beyond the call of duty during times of crisis. Through our interviews, we learn about them, their vital roles, and their motivations behind helping those in need. In recognition of these amazing people, Matt Hardin Law donates $500 to the charity of the Hero’s choice.

To nominate a first responder to be featured on our site, please send an e-mail to community@matthardinlaw.com.

Hardin’s Heroes was created by Matt Hardin to honor members of our community who go above and beyond the call of duty during times of crisis. Through our interviews, we learn about them, their vital roles, and their motivations behind helping those in need. In recognition of these amazing people, Matt Hardin Law donates $500 to the charity of the Hero’s choice. 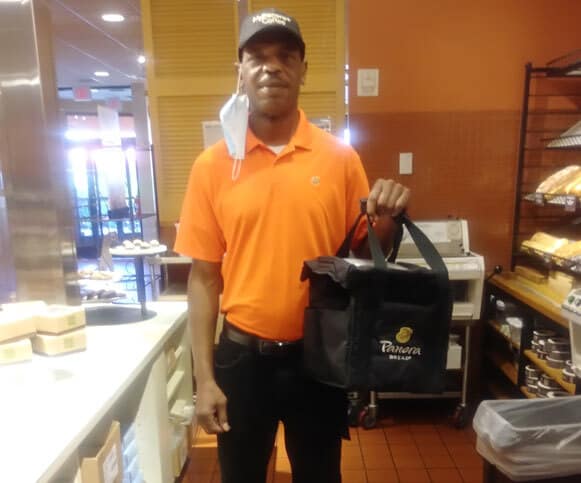 OUR NEWEST HARDIN’S HERO IS…

A local “unicorn,” Willie was born and raised in Nashville. Willie and his wife have raised 12 children together in East Nashville, the youngest being 14, and the eldest, 32. For the last year, he’s been working for Panera as a delivery driver, serving the midtown neighborhood. Many of his delivery spots have been to medical professionals in Saint Thomas Hospital, as well as other businesses.

Due to COVID-19, delivery procedures and restrictions have greatly changed. Keep reading to find out more about Willie and his experience serving the public during the current pandemic.

Tell us a little about yourself, Willie.

My name is Willie Jackson, I’m 55 years old, and I was born and raised here in Nashville. I live in East Nashville and have for some time. My wife’s family is from East Nashville but I’m actually from South Nashville. I like it, it’s a nice place. Nashville has changed so much since I was younger. It’s amazing though, I tell people all the time that when I first started driving in Nashville, rush hour started at 5:00 and it was over at 5:15. It’s like a baby Atlanta now.

How did you start working for Panera, Willie?

Before I was working at Panera, I was driving for Uber. But, I was looking for something more stable. Panera is a nice place. It’s a nice environment there, and I like it.

How has the outbreak affected your day-to-day operations at work?

It’s just unbelievable. Actually, the store that I work in now, they had to close that one down for a while, so I was working at a different store for a bit. You had to go in and take your temperature, and you have to keep your mask on. We always wear gloves so that’s nothing new, but then also they only have carry- out or delivery, which is what I do. There’s a lot of sanitizing you have to do in the store and keeping distance and make sure everybody else is well. Then when you deliver, you can’t go into hotels or apartments, so you have to meet them somewhere. Then a safe distance is between you.

What kind of risks concern you with continuing to work during this time?

What’s the hardest part of your job right now?

It’s not the precautions, because you get used to practicing safety. The hardest part, actually, is when you had to tell a person, “No, I cannot actually bring it up to you.” Some people understand it, and some don’t. Occasionally, you get people that say they’re handicap or sick, and then I’ll bring it to the door. But usually, we can’t deliver directly to someone.

What part of your job are you most proud of right now?

I happen to be an African American man. We’re right in the middle of the pandemic, the Black Lives Matter movement… Everything is happening all at once. People are really, really, really expressing themselves and really thankful. A lot are in the medical field, so they understand, so they’re really appreciative that you’re coming out. Sometimes it’s overwhelming because you see it as “I’m just doing my job,” and the other people see it as it’s something different and something even bigger than what you may have even considered it to be.

A lot of them are working from home. They don’t want to come out and actually have to fight the virus, maybe of fear or maybe out of convenience.

So, then the next line of access would be somebody like me that would deliver, and I guess they’re appreciative of the fact that you’re doing something that they can’t actually do for themselves.

What do you enjoy doing outside of work?

News, researching, YouTubing, reading. Its current events and also stuff that I’d never even thought of looking into. With so many ways to get information, you can pretty much explore anything.

I like all kinds of sports and I like birdwatching. I’m an amateur bird watcher, coming out of Boy Scouts.

Matt Hardin was also in Boy Scouts. How far did you get in the program?

My goal was Eagle Scout. I did take the tough classes, but I did not stick with it. Actually, we moved and that kind of happened. But Scouts definitely expanded my horizon. I’ll never forget it.

What are you looking forward to doing most when things return to normal?

Sports again. I like football, basketball, golf, tennis… I like gymnastics and track and field. My favorite players are LeBron for basketball, and for football I’m a Cowboys fan.

Actually, I picked the Cowboys to follow because when I was in school, all the guys were talking about football games on Monday. But I never got to watch the game because we only had one TV. My mother ran the TV. So, one Sunday, I think she was at work, I decided to watch the game, so I could be in on the conversation come Monday. I turned on the game, and said “I’ve got to pick a team,” so I picked the team with the stars on their helmets. And the very next year we went to the Super Bowl.

Who would you say is your hero?

Right now, I’m liking Dolly Parton. She’s a beautiful female that comes up in a male-dominated industry, and you really didn’t hear anything really bad about her. Then she goes on to want to give books to any kid that wants one until you start school.

Then when [the wildfires in Gatlinburg happened] and all that burned down, she gave a thousand dollars to each person down there, until they rebuilt the place back up. And this was without any government help.

We already consider you a hero, Willie. But if you got to choose one super power, what would it be?

I guess it would be Peter Pan. I’d just want to be a kid and have fun all the time, forever. Or the power of flight, so I could get everywhere faster.

Thank you for taking the time to talk with us, and we hope you have a great day and stay safe.

For sacrificing his time and his own safety to continue to serve those in the Nashville area we’re proud to award Willie with the Hardin’s Heroes title, certificate, and a donation of $500, to the charity of his choice, the Boy Scouts of America, Troop 77.

Click Below To View Our Past Hardin's Hero Honorees