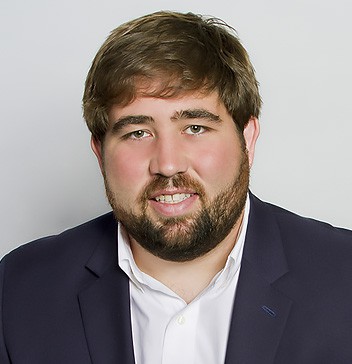 ASSOCIATE ATTORNEY
William Mayfield was born and raised in Nashville, Tennessee. He attended Lipscomb University for two years on a golf and academic scholarship before transferring to the University of Tennessee where he graduated with a degree in Journalism and Electronic Media. While in undergrad, William hosted a weekly “Man on the Street” Segment for the nationally syndicated “Steve Gill Radio Show.” In addition, William had many published articles in utsports.com and the Tennessee Basketball Newsletter.

William attended the University of Tennessee College of Law and received the CALI Award in Contract Drafting for receiving the top grade in his class. After his first year in law school, William served as a summer intern for the Nashville Predators Legal Department where he worked on contracts and researched legal issues for the organization. During his second and third years in law school, William served as a legal intern at the Adams Law Firm, a general practice firm, where he had the opportunity to sit 2nd chair in multiple trials, depositions, and mediations. William also served as the head high school and middle school golf coach, as well as the head assistant high school basketball coach, at Concord Christian School in Farragut, Tennessee while in law school. The middle school program, which William founded in 2013, went on to win state championships in 2015 and 2016 under his guidance. While waiting on his Bar Exam results, William served as an assistant editor for the 2017 Athlon Sports College Football National Preview Magazine.

William and his wife Allyson began dating while in high school at Brentwood Academy. They attend services at Brentwood Baptist Church and serve on the board of Vanderbilt-Ingram Cancer Center Ambassadors. William and Allyson are very passionate about supporting the T.J. Martell Foundation for Cancer Research and the ALS Association Tennessee Chapter. William is also a strong advocate for providing underprivileged youth opportunities to play sports.

William enjoys playing golf, tennis, basketball, ice hockey, soccer, softball, flag football, and pretty much anything else that resembles a sport. He is a diehard University of Tennessee, Nashville Predators, and Chicago Cubs fan and has attended over 150 Tennessee football games in 20 different stadiums.